Last January, Seattle CARES launched the Our Best: Black Male Achievement Mentoring Campaign at a standing-room-only event at Seattle Central College’s Broadway Performance Hall. A few day’s earlier, SCC student Marvin Chapman saw the event flyer and was intrigued. He attended the launch and signed up to become one of the program’s very first mentors. 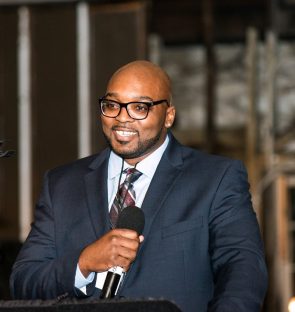 “I knew I was going to get involved with mentoring when I showed up that night,” said Chapman. “I was tired of hearing and talking about the problem. I wanted to be part of the solution.”

As a mentor assigned to M.U.S.T., one of our partner agencies, Chapman has experienced both the challenges and the rewards of mentoring. “There are lots of different situations out there that feel like a crisis to a young person,” he said. “You have to be able to stay calm and hear what they are saying. For me, one of the most rewarding things is seeing young guys navigate tough times. It’s great when you hear them say or do things they learned from you.”

Chapman did not have a mentor growing up, but he did learn positive behaviors from adults around him. Currently a computer science major, he hopes to earn enough money in his career so he can dedicate his energy to improving his community.

“I am a mentor because I want to do what I can to change the false narrative surrounding the black community,” said Chapman. “I feel as though the media perpetuates negative stereotypes while mass incarceration is removing strong male role models from our community. This causes youth to accept the images they see in the media as true and to act in certain ways.”

For Seattle CARES Executive Director Don Chapman, Marvin’s recruitment at the launch event was a touch of serendipity. “It’s fitting that the place where we held the launch event attracted one of its own students to get involved,” said Cameron. “Here is a young man attending that same college who wanted to become a mentor and he did — and a really good one at that!”