A group of mentors and mentees accompanied Seattle CARES executive director Don Cameron to the 2018 State of the City address given by Seattle Major Jenny Durkan on February 20. 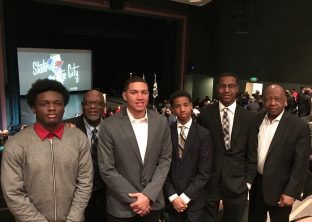 In her speech, Mayor Durkan echoed many of the key messages central to the Our Best: Black Male Mentoring Achievement campaign: racial justice, social equity and real opportunity for all.  “We believe that every person is born with dignity and promise, and they deserve real respect and real opportunity,” said Durkan. “A person’s value is not based on net worth, on the country of birth or on the color of skin.”

On Jan. 12, Durkan attended the launch of the Our Best campaign at Broadway Performance Hall, delivering an impassioned speech about the value of mentoring. At this week’s State of the City address at Rainier Beach High School, she spoke to an enthusiastic crowd about her plans to offer free community college to all public high school graduates and to work harder to share prosperity among city’s residents.

At the end of her speech, Durkan encouraged attendees to resolve that next year, “we can look each other in the eye and say the state of our city is more just…because of our resolve, our actions and our love.”