When the COVID-19 pandemic forced Seattle Public Schools to close, Seattle CARES had to move quickly to transition The Rising mentoring program at Denny International and Meany middle schools to online formats. 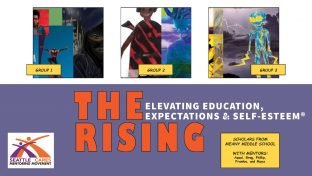 But the virtual environment posed a new set of challenges for Seattle CARES: How to keep the students engaged. The Rising team reached out to the scholars for ideas.

One idea that sparked interest among both mentors and scholars was to create superhero stories and images.The mentors quickly realized the potential of this creative exercise and decided to make it a centerpiece of the online program.

In the beginning, the mentors worked with the scholars to stimulate creative work. Each scholar was asked to come up with a superhero version of himself; each group worked together to create a narrative.

Through local contacts, Seattle CARES reached out to a group of nationally established comic book artists and writers who volunteered to help the scholars and mentors bring their ideas into shape. There was not enough time to create a complete graphic novel but a series of short stories, one for each group, was definitely doable.

The superhero characters were adapted from movies, cartoons and comics but each scholar introduced his own personal elements. The stories they crafted reflected their concerns – whether it was the COVID-19 pandemic or rising police violence. All these issues were folded into discussions of the stories along with the personal dramas that the mentors and scholars discuss regularly. 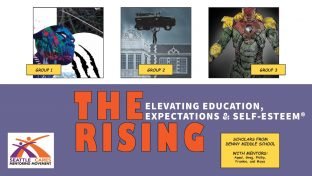 Working on the superhero stories provided an outlet to explore tensions. The creative consultants saw how the ideas and thought processes of the scholars made their creations vivid and rich. As the program ended, the scholars were encouraged to introduce as much of themselves as possible into their chosen hero-templates.

“We wanted to stretch their imaginations, to empower them,” said Seattle CARES director Don Cameron. “We wanted to show them that change can happen if they work hard and think positively.”

The students met the challenge with imagination and truthfulness. Their project was made into a PowerPoint presentation that was shared with each groups and the organization at the end of the program.

This groundbreaking model has potential for broader use. Creative group interaction is incredibly useful to engage scholars’ interest in an online mentoring setting. With the guidance of their mentors and consultants, the scholars built something that could resonate well beyond the program’s end.