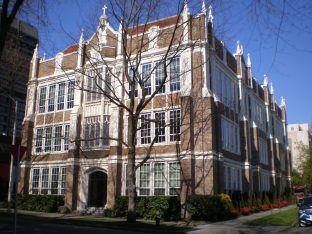 This fall, former Rising scholar August entered ninth grade at O’Dea High School, a private all-boys college preparatory school in Seattle. Besides focusing on his studies, August plays on the basketball team and is looking forward to starting track and field in the spring.

August is one of four Rising scholars currently attending O’Dea and the only one who participated in The Rising at Denny International Middle School. Rasaan, Breylon and Julian were part of The Rising program at Meany and are also nine graders at O’Dea. Their success is the result of a community of caring and dedicated individuals.

Take August, for example. For two years, he worked hard in The Rising at Denny International Middle School, taking advantage of its tutorial program. His progress was supported by two Rising mentors, Jeff Forge and Gregory Banks. Their interest and August’s determination made all the difference. As Lucas Dobbs, vice principal at O’Dea, said recently: “August’s hard work, dedication to his community, diligent efforts with his studies and leadership skills made O’Dea possible for him as a next step in his journey.”

Slightly more than half of the student body at O’Dea is white; Black students comprise about 16%. Considering these demographics, it was challenging for August to establish friendships with some of the other students.

To help, Seattle CARES reached out to another O’Dea alum, an individual who went on to earn a doctoral degree, to mentor August during his freshman year. The two hit it off. They have pep talks frequently on Zoom and August is feeling more comfortable in the O’Dea environment.

In fact, his story was so inspirational he was selected to be part of a new video produced by National CARES Mentoring Movement. The film crew traveled to Seattle this past December and spent two days filming Rising scholars, mentors, educators, parents and staff from Seattle CARES. Read more here.

The four Rising scholars at O’Dea know their studies are preparing them not only for college but for the rest of their lives. They should be incredibly proud of their achievements, and we know their futures will be bright.