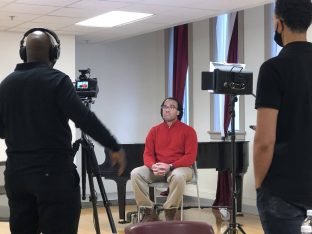 During the taping, two mentors, Christian Love (left) and Greg Banks, spoke about their involvement in the program and their passion for mentoring. Two former Rising students were also interviewed: August, now a ninth-grader at O’Dea High School, and Zack, who goes to Garfield High School (below, right).

Denny Principal Jeff Clark and Assistant Principal Mawiayah Fields shared their comments on-camera, as well. Both have been long-term supporters of The Rising program at their school.

Single mother Tigest Beyene, an enthusiastic participant in the Wellness Community Circles, shared her thoughts about the importance of the Circles and how they provide a safe, judgment-free space for single moms trying to become better parents. 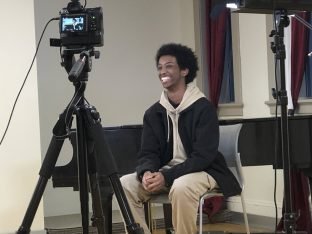 The new video will premiere in late February at the National CARES gala event in New York, “For the Love of the Children.” After that, it can be viewed on the National CARES website. More details about the production will be posted as soon as they are available. The video also includes inspirational stories from CARES affiliates in Atlanta and Detroit.