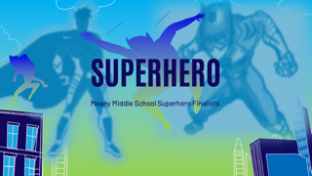 Super heroes were a big hit among Rising scholars again this spring!

Students in The Rising at Denny International and Meany middle schools used this innovative curriculum to spark meaningful conversation and learn what character traits are important to live a quality life. The program was launched in 2020.

The Rising scholars created and named their own super heroes, designed super hero costumes and gave each crusader a super power – a force they used for good and to make the world a better place. For example, Tonka made people disappear into a universe called “the back room,” replacing them with alternate beings. Crowbend could fast-forward or stop time, and Rizz was a shape-shifter.

Working in small groups, the scholars created back-stories for their super heroes. Vilo ran away from home and lived in an abandoned factory where he built a machine that gave him super powers. Crowbend lived in a crime-filled neighborhood in New York. Thanks to his super-power, if someone sets off a bomb, he could stop time to disable it.

The super heroes program allows the scholars to discover and express their inner creativity. “In the super heroes project, I created my own hero,” said Ben (left, in photo with friend Joey) who attends Meany Middle School. “It was a way for us to use our imagination and to focus on completing an assignment. I felt like I was free again, after living in the pandemic.” 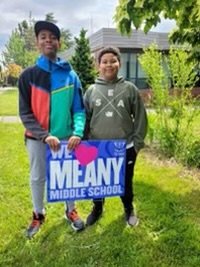 Several graphic designers helped the students translate their creative ideas into comic-book format. At the end of June, the scholars turned in a PowerPoint presentation to tell the story of each super hero.

“We hope the students will remember the lessons they learned from their super heroes project,” said Don Cameron, executive director, Seattle CARES. “We want to inspire our scholars to have courage and to serve their community.”